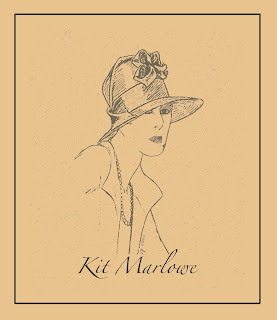 The big news is that the serial has shifted over to the website. A slight change of address that will consolidate everything in one place, simplifying things I hope. If you read the serial via Facebook or Twitter anyway, you won't even feel the difference. But if you've got it bookmarked, change to the new address. A new episode this Sunday. Thank you!
Posted by K. A. Laity at 6/19/2012 03:15:00 PM No comments:

I have some behind the scenes changes to make that will delay this week's episode. Nothing drastic: all will be revealed soon. But in the meantime, enjoy these lovely photos of Rome! Fingers crossed, we'll be back next week with more from our heroine, her father, the alchemist and his Venetian lion. 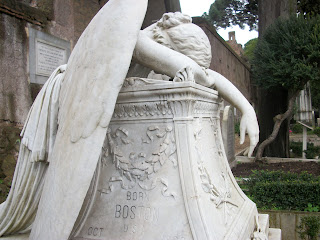 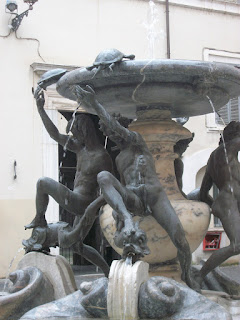 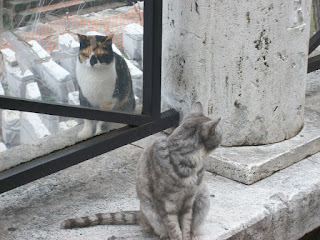 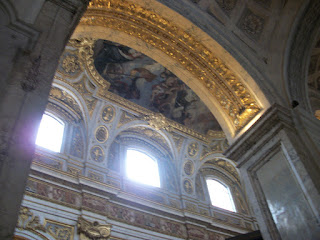 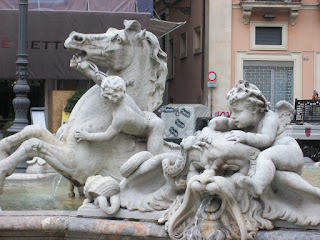 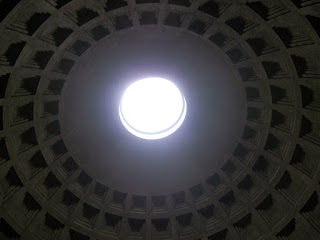 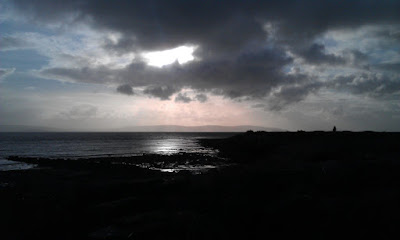 Helen's father barked with laughter. "A dangerous weather development occurs and your only thought is, 'I must write this in my journal'? You are your mother's daughter indeed."

"I find that a great compliment, Papa."

"As you should." He continued to gaze at the water spout, but Helen thought his face looked much softer now, as if the dark clouds that sat upon his brow had like the son of York's been in the deep bosom of the ocean buried for now.

The water spout, which had growing bigger and darker, suddenly seemed to be growing whiter and more transparent. As it curled down from the clouds the middle part grew whispy and the two halves parted. For some reason, Helen's mind jumped to the image of Michaelangelo's fresco of the creation, the hand of Adam and his creator meeting in the middle, though here the two limbs drew apart.

"And there it goes," Romano said, his comments punctuated by a squawk from Tuppence. The tail of the spout appeared to be absorbed into the grey clouds above it.

Helen sighed, unwilling to admit that she had found the phenomenon worrisome, more for her father's sake than her own. She could swim after all. And while the channel was very wide, it might be possible for a human to swim it. Or at least half of it, which is about how much they would have to do.

"Flotation devices," she muttered under her breath, and went at once to her journal of the journey. Over-water travel, consider having some kind of Kisby Ring or cork device aboard. She had heard of a lifeboat captain who had designed some kind of cork vest that could be worn, but Helen had neither seen one or a drawing of one so found herself imagining a waistcoat covered with bottle stoppers, which was surely wrong.

There were so many new inventions. It was truly an age of discovery! Helen burned to be part of the age, to make her mark and be part of history.

Surely this journey was a step in the right direction. Her face flushed with excitement. If the alchemist came through for her on that new miracle fuel—the art of air travel would be revolutionized!

Helen broke away from her thoughts of the future. "What is it, Romano?"

The pilot pointed toward the dark clouds gathered on the southern horizon. Helen found herself somewhat alarmed to see a sudden explosion of lighting strikes from their increasingly black depths.

"Perhaps we should steer a bit further north," she counseled Romano.

"Are we going to end up in Belgium?" her father asked as Tuppence began to croak somewhat urgently.

"Don't go on about Belgium, Papa," Helen scolded, consulting the map on the stand. "It's a lovely country."

"You've never had their stew," he muttered mysteriously.

"It's made with ale instead of wine," her father said as if the point could not be argued. "And they serve a most wretched dish made of eel with some kind of green sauce."

Helen blanched. "That does sound revolting, but I have had Belgian waffles with chocolate and they are sublime, so I can't imagine that all their food is like the eel dish. After all, there's not much of British cooking you could put in competition with it, is there?"

"Your mother's stew is superb."

"Indeed," Helen said, "but I understood her to use a Belgian recipe."

Her father stared at her in dismay.

"Signorina," Romano broke in again, "the storm, she gets stronger."

"From which direction come the prevailing winds?"

"Can we outrun the storm?" Her father asked, his face beginning to show a little shade of green like the Flemish dish.

"We shall endeavour," Helen said as Tuppence hopped over to land on her shoulder. "The storm looks fierce, but the winds don't seem too bad. The lighting is a little tricky but we ought to be fine." Tuppence, help me keep watch, she telegraphed to the bird.

Her father sat himself down once more, looking a little gloomy. "I bet it's sunny in Yorkshire."

"Doubtless," Helen agreed cheerfully. Across the channel to the south the lighting strikes flashed, their electric dance growing bolder.
Posted by K. A. Laity at 6/10/2012 11:00:00 PM No comments:

Stolen by the Muse 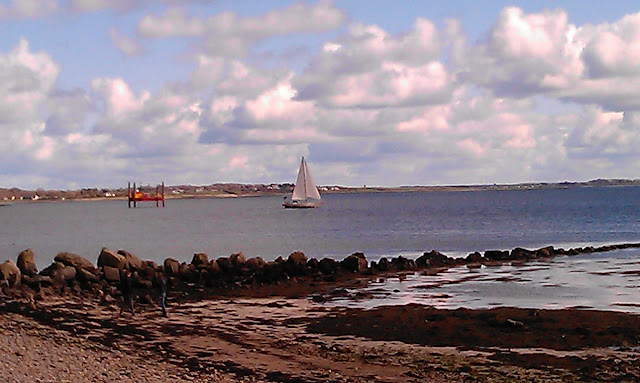 7.8 Mysteries from the Past 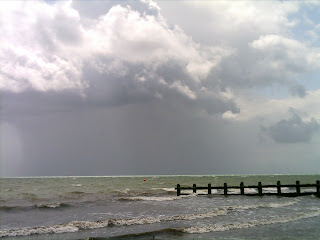 Helen looked up into the clouds where the Italian pilot pointed. Her eyes grew large. "I've not seen one of those before."

Romano shook his head. "I have not seen one so large."

"What the blasted flatch are you two on about!" Helen's father demanded. He seemed determined to look everywhere but in the direction they stared.

"Papa, look there. It's descending from the cloud." Helen nodded toward the heaven's, captivated by the sight.

"We call it 'getto d'acqua'," Romano said. "You see them from time to time on the Mediterranean. Quite extraordinary."

"Are they dangerous?" Helen asked, sneaking a look at her father who had yet to turn and take in the strange formation snaking down from the clouds.

Romano shrugged. "Not usually. They form, they dissipate, poof."

"I suppose they're usually far from land," Helen suggested, thinking about the possibilities of evasive movements. One disadvantage with an airship is that it took a while to change directions. You couldn't wheel and turn as on a horse.

Something to think about later; Helen made a mental note to consider speeding the process of turning.

"They are more plentiful at the warmest times of the year," Romano noted. "I have only seen them from a distance. Or so small they appeared to be dissolving almost as quickly as they formed."

The pilot considered this for a moment. "Minutes, surely no more."

Helen's father appeared vastly comforted by this news. "What's all this nonsense?" he blustered like his usual self. He even turned his head ever so slowly to take a look at the phenomenon.

"Bloody hell!" He goggled at the long cylindrical sweep from the clouds. The funnel had lengthened, nearly touching the dark waters below where the disk-like shape whirled darkly.

"Have you ever seen a water spout, Papa?" Helen asked, though she suspected his surprise was indication he had not.

"Not for many a long year," he said with a weariness that seemed to have nothing to do with the sight before them.

His words surprised Helen. "Where did you see a water spout?"

He remained silent for a time and Helen had begun to think he would not answer, but he sighed as he watched the snaking shape in the distance. It swayed like a dancer held between sea and sky.

"When I was in the West Indies," her father said at last, "I saw a few of them. They were generally larger and formed much more quickly."

"I have heard they are plentiful there," Romano said. "And hurricanes, too."

"You were in the West Indies, Papa?"

"Hurricanes were much worse," Helen's father said, his eyes upon the water spout, but his thoughts seemed very far away. "They cause real devastation across the land, ripping trees out at their roots and knocking down houses. Tropical regions are full of all kinds of horrible pestilences."

"When were you in the West Indies?"

Her father laughed but the sound lacked mirth. "Long before you were born, child. Long before I met your mother even." His face took on a darkness much more menacing than the dark clouds overhead.

"How exciting!" Helen said. "I would love to visit the West Indies."

"No, you wouldn't," her father said a little too sharply. "Horrid place. Hot, humid—it does terrible things to your brain. Saps your will. Makes you stupid. Drives you mad." He rubbed his eyes as if the view fatigued him. "Excessive heat was not mean to be borne."

Helen wondered, not for the first time, what tragedies lay in the distant days of her father's life. They all knew the story of the fire that scarred him so and how it had called their mother back to his side by some almost mystic power, but mysteries abounded. There was such a Byronic air about his distant past that she often took to be more jaunty than terrible, but the haggard look on his face now spoke of horror and tumult.

"See how the water dances," the pilot remarked, his voice full of wonder.

"I'm just glad it's dancing a good distance away," Helen's father murmured. Sure enough, it seemed to be moving away from the airship.

"I must write of this in my journal," Helen said firmly. 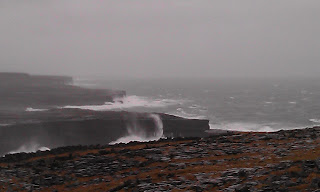